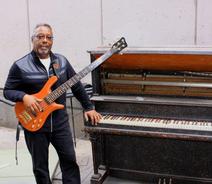 Born and raised in Omaha, Nebraska, Bill comes from the extremely musical Rich family. His brother, Herbie Rich, was one of the original members of the Electric Flag. His sister, Carolyn, is an accomplished vocalist. Bill played with several local bands, most notably the locally famous 7 Wonders with his siblings. Shortly after graduating from high school he went on the road with The Whispers who came through Omaha looking for a bass player. He spent the next few years touring nationally with them, ending up in San Francisco where he met Buddy Miles. Bill spent many years playing with The Buddy Miles Express. He completed numerous successful national tours with Buddy (another Omaha native) and recorded two albums with him. All three members of The Buddy Miles Express (Buddy, Bill Rich and his brother, Herbie Rich) were inducted into the Nebraska Music Hall of Fame. In 2004 Bill was himself inducted into the Nebraska Music Hall of Fame.

One of the highlights of Bill’s career includes his association with Jimi Hendrix. He played various gigs with Jimi and recorded with him many times. Jimi produced “69 Freedom Special”, a song Bill wrote on the Buddy Miles album “Electric Church”. Bill re-recorded this song for his solo release “Bill Rich: The Fee-Vah”. And check out his his 2014 effort, “Bill Rich - Can You Pheel It?”

Bill began playing with the legendary Taj Mahal in 1972. This association has lasted over forty years. During his years with Taj, Bill has developed an international following through his tours in Europe, South America, Africa, Canada, Australia, New Zealand and other exotic locations such as the Fiji Islands. Bill continues to tour with The Taj Mahal Trio.

Bill’s latest CD, “Bill Rich: The Fee-Vah”, is a unique blend of blues and funk that will leave you mesmerized. It features the beautiful bass playing and lead vocal work that only Bill can produce. Taj says “It’s some serious music with some serious players.” Purchase “The Fee-Vah” and listen for yourself.

In 1972 Bill moved to Denver and made the Mile High City his home.